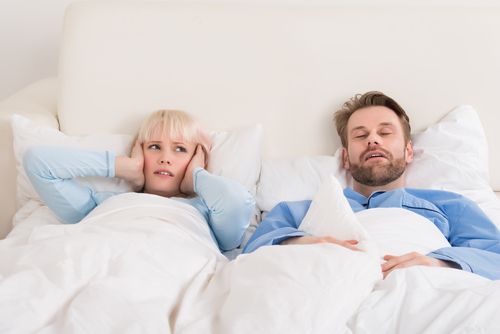 If you have ever laid awake next to a person who is snoring one minute and then appears to be holding their breath the next, then that person could be suffering from a condition known as sleep apnea.

What is sleep apnea?

Sleep apnea is a disorder that is estimated to affect around 18 million Americans, with men more susceptible to the condition than women. It is characterized by interruptions to regular breathing during sleep, which appear almost like the sufferer is holding their breath. They will then restart breathing, often starting with a large snore or snort. The number of episodes experienced each night can vary from person to person, with a greater number equalling greater severity of the condition.

Obstructive sleep apnea, also known as OSA, is the most common type of the condition and occurs when the airflow through the body becomes temporarily blocked. This happens because the soft tissue at the back of the throat collapses and prevents the air from passing through. It then takes a few seconds for the patient’s unconscious mind to realise that they have stopped breathing, and when it does, the brain sends a signal to the lungs to inhale or exhale a larger breath than usual, which exerts enough force to push past the blockage.

Weight is the biggest contributing factor to a rising number of people being diagnosed with OSA. This is because people who are overweight or obese usually have a greater amount of fatty tissue at the back of their neck or throat, which then collapses once the person relaxes.

There are also a number of other factors which are believed to increase the likelihood of someone developing obstructive sleep apnea. These include:

- Smoking. Nictone is known to irritate the airway, causing inflammation that can contribute towards a blockage forming.

- Enlarged tonsils and adenoids. Their position next to the airway means that if they are swollen for any reason, they may cause OSA.

- Alcohol. Alcohol is a natural relaxant and can cause the muscles in the back of the throat to relax too much and collapse, blocking the flow of air.

- Age. As we get older, our skin and muscles naturally begin to lose some of their tightness. This means that older people are more likely to suffer from obstructive sleep apnea.

In central sleep apnea, the disruption to the regular pattern or breathing is caused by a communication problem between your brain and body. While OSA physically prevents the sufferer from being able to breathe, in central sleep apnea, the patient simply stops trying to breathe independently. This is because the brain fails to tell the muscles (that usually work unconsciously while we sleep) what they need to do in order for us to inhale and exhale.

Central sleep apnea can occur by itself, or in conjunction with obstructive sleep apnea.

Who is affected by central sleep apnea?

Unlike OSA which is often linked to lifestyle choices such as weight gain, smoking or excessive alcohol consumption, central sleep apnea is usually associated with other medical conditions. Some of these include:

Patients who have suffered from a stroke or other condition or injury which has caused damage to the brain stem may also suffer from central sleep apnea.

If you don’t have a partner that notices your periods of interrupted breathing during sleep, it can be difficult to realise that you may be suffering from sleep apnea. However, there are some other tell-tale signs that you can look out for, which are commonly seen across both types of sleep apnea and include:

- Snoring - although this is most commonly seen in patients with OSA.

- Insomnia without being able to identify the cause.

- Waking up feeling more exhausted than when you went to sleep.

- Chronic fatigue, with the patient sometimes unintentionally falling asleep during the day.

- Waking up feeling short of breath.

The treatment for sleep apnea is also largely the same regardless of the type that you have. Lifestyle changes are by far the biggest step that you can take to naturally improve your sleep apnea, as well as improve your overall health. However, many people still find that they need additional therapies to successfully treat the condition.

Tongue Retainers. For some patients, it is their tongue that relaxes during sleep, falling into the back of the throat and blocking airflow from the lungs to the brain. Tongue retainers change the positon of the tongue in the mouth during sleep so that the airway becomes less obstructed.

Mandibular Advancement Devices. These devices look similar to mouth guards and push the bottom jaw down, which creates a larger area of space at the back of the throat.

Positive Airway Pressure (also called CPAP) is the gold-standard non-surgical treatment for obstructive sleep apnea. The treatment involves the patient wearing a mask over their nose or mouth while they sleep, attached to a machine which emits a continuous positive pressure. For patients with OSA, this force is strong enough to push past a blockage, and for patients with central sleep apnea, it forces the oxygen they need into their lungs. There are some similar alternatives to the CPAP machine, including a bilevel positive airway pressure machine (BPAP) which adjust the amount of air delivered to the lungs depending on whether the patient is inhaling or exhaling.

Here at Pecan Park Dental, our team have the comprehensive knowledge, skill and experience to be able to offer support to patients who are suffering with sleep apnea in and around Arlington, TX. To find out more or to schedule a consultation, please get in touch today.